Time is flying by. It’s been almost a month since I left Brisbane and my bike Bessie and I have pounded our way through 1700 kilometers so far. This week brought fine weather, which was great for hanging out in Sydney and doing some big days on the bike but a breakdown just north of Ulladulla meant I had to hitchhike into Moruya to replace a part and skip over about 80 kilometers of highway, a bittersweet feeling. The generosity and abundance of human compassion continued this week and I just have to report back that people are actually great, don’t be fooled by the news. I have had people pay for my ferry tickets, offer to drive me to the next town after a breakdown when they were headed in the opposite direction, offer to help promote my campaign and given me free food at supermarkets, all without expecting anything in return. Simply incredible.

Since the last update, I rolled south out of Newcastle and dropped in on my cousin Tessa, her fiance Dean and their puppy Thor at their pad in Tumbi Umbi, near Gosford, where I took the chance to have a rest day. Tess and Dean have just spent the last 6 months renovating the interior of a huge 5 bedroom brick home and it looks fantastic. It was great to talk some rubbish with Tess, who I hadn’t properly spent any cousin time with for almost 5 years, despite being very close and even sharing a house at one point.

Next stop was Coogee Beach in Sydney’s eastern suburbs, where I kept the cousin train going and couchsurfed with Tessa’s sister Kate in her unit overlooking Gordons Bay. 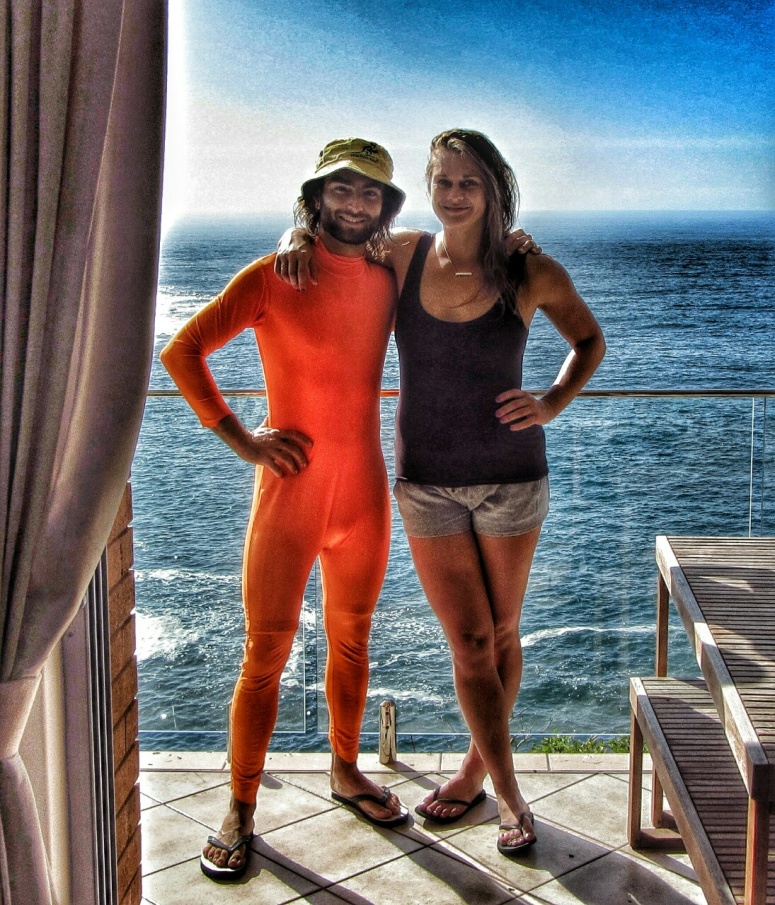 During the Sydney stopover I also managed to catch up with my mate Ant, who I met on a farm in the hills of Colombia while he was riding through South America, and my mate Susan, who helped me get my aussie fix while living in Montreal. I also took some time to check out Sydney, as I’d only ever driven straight through it on road trips. I discovered that the Opera House is actually made of old bathroom tiles and Bondi is just full of people in tight fitting active wear with slogans like ‘Never Stop Running…’, walking along holding cappuccinos.

After a hungover coastal walk and a recovery breakfast at the Three Blue Ducks cafe on Saturday morning, I was off again and pedalling south to Cronulla, where I climbed aboard a ferry and had the ticket collector laughing so much at the carrot outfit that he gave me a free pass. Landing in Bundeena, I ran into a huge American bloke (he called himself ‘Creature’) who told me of an amazing limestone cliff formation called Wedding Cake Rock nearby, so I hiked out to see what it was all about.

On the hike back, I just about tripped over a 6 foot brown snake and had a little red belly black slither away from where I had locked my bike up in some scrub.

After a free camp in the national park, I packed up early next morning and decided I would put down some solid food miles. The scenery along the stretch north of Wollongong was nothing short of eye-blowing.

As I rode into Kiama at lunch time I was greeted by the sounds of a jazz festival by the beach, so I did the decent thing and had a swim, a feast and a siesta in the shade. Feeling refreshed and with my jazz hands tingling, I belted down the highway to round out a 140 kilometer day, my biggest so far, ending at Maggie and Paul’s house, my warm showers hosts for the night. Although I was exhausted, we stayed up late sharing stories and after hearing about some of the other guests they have had including 3 french dudes who had been cycling for a few years, I was humbled and entertained. 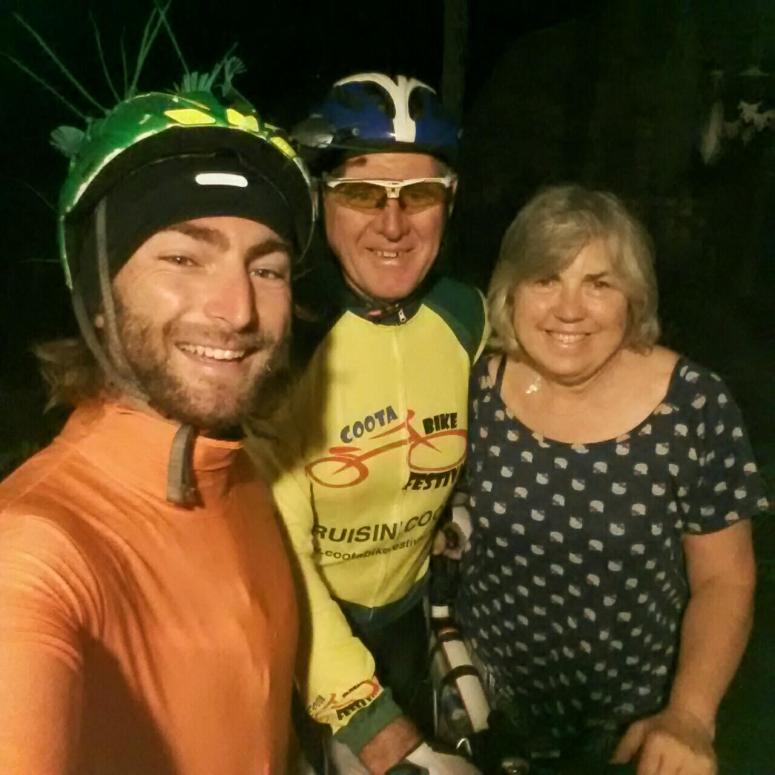 After another early start, I was making good headway along the highway shoulder when I came upon a lanky young German guy pedalling his enormous bike and trailer up a hill. I pulled alongside for a chat and he said he was on his way to Melbourne and we joked about how slow he was going and that I was like a greyhound in comparison. I streaked off and not one hill later I heard a snap followed by a gnarly crunching sound, my derailleur hanger had decided it hated life and had disintegrated out of the blue. Sure enough, along came the lanky German with some witty comment about tortoises and hares. Well played German guy. Well played.

After ringing a few local bike shops, I found the part I needed was in stock at Moruya, about 80km south of where I was. Sticking the thumb out, I was able to hitchhike first in the back of a ute, then in the back of a food truck and finally in the back of a van all the way to Moruya just before the bike shop closed. 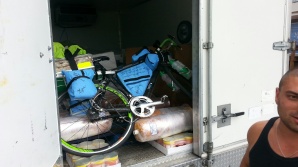 Ironically, the guy that gave me a lift in his food truck turned out to be heavily into reducing food miles and was working on a database project that would enable consumers to order produce directly from local growers and use an uber like system for delivery. I figured that the small inconvenience of the breakdown was worth it just for the ideas that this guy gave me about how I could improve my backyard farming project.

As I lifted my bike from the van in Moruya, I also discovered my rear tyre was flat and had chunks of glass lodged all through it, the first flat I’d had since leaving Brisbane. Two hangers (one for a spare!) and one spare tube later, I was back in action and rolling south out towards Old Mill Road Farm, where I had organised to do some WWOOFing for a couple of days. Struggling down the steep gravelly driveway in the dark was all worth it for the warm welcome I received from Fraser and Kirstie and the two interns, Alex and Nadia. With my tent pitched in amongst the hops vines overlooking the fields, I was treated to homemade pizza and a beer and all was good in the world.

I feel that the time I will spend here on the farm will be hugely educational but I will leave the farm saga until next week’s update.

On the fundraising front, with two weeks to go we are approaching the 2K mark but are still a bit short of the 3K target. After considering all of the initial setup costs I feel I will have for the project, the 3K will be a huge help to go with whatever money of my own I can pour into it. As a kickstarter campaign, I need to raise my target or I will not receive any of the funding at all so if you are considering donating to the cause, please jump onto my campaign website at www.startsomegood.com/backyardfarming and have a look at the rewards section and maybe throw some spare change at it. Thank you so much to all the legends that have donated already, I couldn’t be more grateful.

That’s it for this week, get ready for lots of photos of vegetables and dirt next week!

One thought on “Part 4 – Newcastle to Moruya”